Maybe in 5 mins, the foods is gone. As we all know that the obesity is harmful to human health, so is pets. 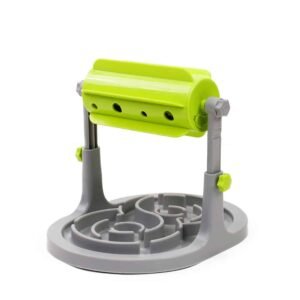 DOES YOUR PETS EAT TOO QUICK?

Maybe in 5 mins, the foods is gone. As we all know that the obesity is harmful to human health, so is pets. Pets slow feeder concept is advocated by experts and veterinarians at a wide range.

Our slow feeding dispenser controls the speed of your dog eating while the puzzle maze promotes brain activity.

Made with high quality products and , this toy is safe for your dog. The non-slip design on the bottom makes the toy more stable and won’t tip over when the pet is eating.

Peterson
Rated 5 out of 5
This item is pretty amazing. I'm still trying to figure out what to do about the one major flaw...We use this every day for meals. My dogs meals no longer disappear by the time her food container has been put away. I receive entertainment watching this awkward 2.5 year old Pitt bull terrier use her paw to whack the wheel like a Neanderthal and dispense food to herself. Luckily she also enjoys the challenge. We both have fun as the major flaw of this item makes me get interactive with her.Now we get to talk about the flaw...This thing moves across the floor. It moves off the food mat and the "Neanderthalic whack" my dog gives the wheel doesn't help much. This food puzzle has non stick feet and I thought paired with a non stick mat it would be fine. It's not. I have to act as border patrol and push it back towards the area of the lower floor it came from.No matter how much I wrack my brain to come up with a method to keep this thing immobile nothing comes to me. I place at one spot in the room and it moves all over the room as my dog eats. This is the flaw. We both love this thing though... But I would buy an upgraded model if the company can create a design that doesn't migrate so easily.
Whiskey Bottle
Rated 5 out of 5
The media could not be loaded.  Works well as a slow feeder. The maze is a bit of a plus, buys a little more time and collects the kibble. Fairly sturdy at all heights. The action on the spinner is light enough that most dogs shouldn’t have any problem with it nor get frustrated. Eventually they might tip it over of course — see video — so it’s still best used under supervision or adjacent room because otherwise the rubber opening which stows the kibble will be history in a flash. I don’t recommend more than a cup of kibble max.
A. Nichols
Rated 5 out of 5
Our 5 month old 20 pound puppy was polishing off a cup of food in the morning and again in the evening in under a minute. After receiving this feeder/puzzle it took him about a day to figure out how to get his food out of this contraption, but now he's spinning this thing like crazy! It takes him a good 15 to 20 minutes to get a cup of food out of the tumbler and he loves playing the game. The only downside is that the tumbler spins so fast sometimes that it can send his kibble flying 3' to 4' feet away from the feeder tray. For us that isn't a deal breaker since he is very good about picking up any pieces that end up on the floor. All and all super happy with this buy and highly recommend it for curious/intelligent speed eaters.